HI. It's been a while! Christmas happened, and then my computer had to go in the shop, so I just haven't really had much chance to do some good fashion pics. I also haven't reinstalled photoshop on my newly fixed (ie new hard drive) comp, BUT I WON'T LET THAT STOP ME. So, what are you in for today?

Why, the Winter Cosmetics Fair of course!

Like last time, instead of cataloging what I got, I'm just going to give you some makeover shots, things I put together inspired by the wonderful stuff I picked up at the fair. Enjoy! And read under the pic/jump for credz and details! And remember, you only have 6 more days left of the fair! 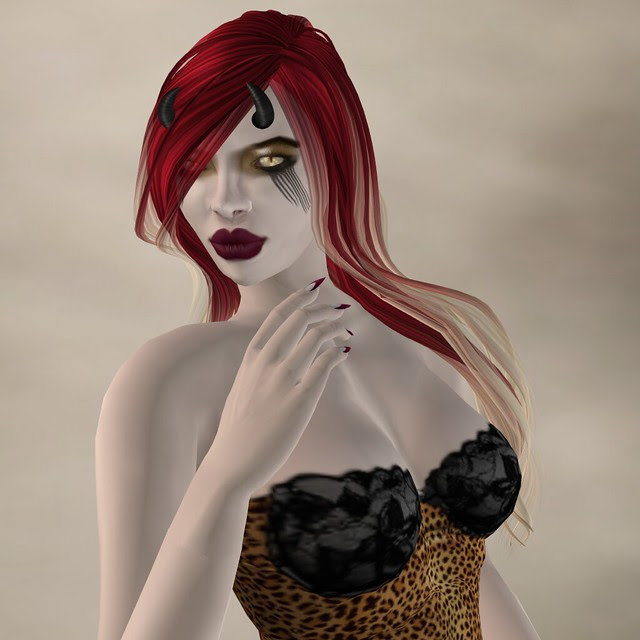 The Cosmetics
On the eyes I first layered Zibska's "Hennie" in terra, a dramatic and metallic eyeshadow. I should note that I'm wearing a brow-less skin, so the black 'eyebrow' is actually part of the makeup tattoo layer. I'd also like to point out that for each makeup set you get a lot of colors, but you can also buy a fatpack of all Zibska's Cosmetics Fair offerings at a 50% discount. If you like more than two of the styles she offers, it's worth picking up!

On top of the Zibska layer I've added Nuuna's "Aya" in black, which are the streaks under the eyes. Nuuna makes some really beautiful distinct designs that look fabulous layered on top of color washes and blurry style makeup colors! They come in several colors, and are modifiable, so you can tint them to match just right.

Dramatic eyes need dramatic lips, and Adored Bodyshop serves up some luscious lips that go well. These are the "Jelly Lips" in poisonberry and I love how velvety and translucent they look.

I'm also wearing Action's "Mesh Natural Lashes" in black, which are a bit indistinct in this picture, and that is entirely the point of why I bought them. You see, I've been looking for some eyelashes that looked sort of average, rather than the big dramatic eyelashes you see around the grid so often. Don't get me wrong, I love big dramatic lashes! But sometimes you need something that adds a dash of edging without getting in the way, and these fit the bill perfectly. The best part? They are modifiable! They actually have an alpha piece in addition to the mesh lashes, to make them look a little fuller, but you can totally edit them out if you don't need them, and THAT is fan-fucking-tastic! Seriously, Kudos to Action for being smart and making these modify! Check out the close-up below - 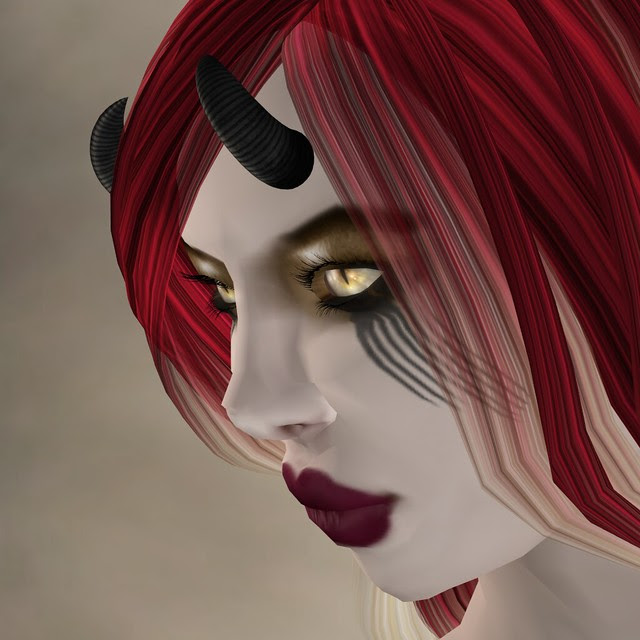 The Top
A shout out to Sn@tch for their awesome midweek deals! If you don't already know, every Wednesday Ivey puts out a set of clothes for super cheap and it's worth checking it out every time. This week the special is the "Ferocious Bustier" and I'm wearing it in gold. The full set has a bunch of colors and they are all pretty. Also! They're system layers, so you can wear them under your mesh without problems, AND it comes with tango appliers for you busty lovelies!

The Nails
Flair has some very nicely priced and lovely Slink nail sets at The Deck's My Attic event! The set I'm using here is part of the 194 & 201 pack. Each set has 8 colors, and they're quite fun!