SL Bloggers - Is your avatar more or less your current biological age? Do you portray a younger avatar, or older? Why is this?

My avatar is older than time, by virtue of being a demon goddess.

But why? Where did she come from? Am I on a power trip? Well, I don't *think* I'm on a power trip, but I think only those outside my head could answer that for sure. As for where it all comes from - it comes from the strange dreams I have, which do a marvelous job of mixing together the various things I think about during the day. Common themes are things like the end of the world, eternity, what's outside the universe, science and fantasy mixed together, realities altered and permeable. I have dreamed of all knowing cats, battles raged between nations of demons, fighting and winning against an evil god that parades himself as good, being a double agent for aliens and unable to decide which side I want to be loyal to.

It was not omnipotence that I wanted to evoke with my "goddess" avatar, but rather the mystery that I find present in all things, a willingness to look into that mystery with eyes wide open, and an acceptance of whatever truths that can be found in that mystery, no matter how strange or terrifying they may be. 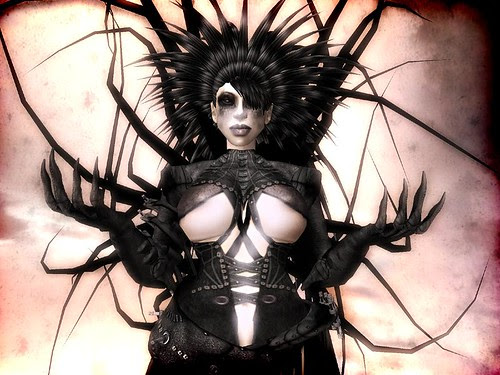 RL Bloggers - Do you lie about your age? Do you think you act your age? Are you where you thought you'd be at your current age?

I never lie about my age, though sometimes I have to *remember* the exact number lol. For the record, I'm 32, and I love it. I don't think I act the way society thinks 32 year olds should act. Rather, I do my best to always be myself, whatever that may be. Age is mostly just a number and an amount of experience. Whether you choose to learn from that experience has more to do with personality than a set amount of time you've been on this earth. I've known 12 year olds wiser than many my age, and have known 40 year olds that act as petulantly and selfishly as teenagers. So, generally, I don't care how old someone's body is. I only care if they can interact with me as a respectable human being should.

<3 Rue
at June 16, 2010
Email ThisBlogThis!Share to TwitterShare to FacebookShare to Pinterest