Topic #5 is blogger's choice, so I thought I'd talk about someone who keeps poking me insistently for some reason.

This is Zoey Dreyfus. She is a character who lives in my head, along with a lot of other characters. She's not very flashy or very weird (at least, to first impressions ;P) but for reasons that I am not entirely sure of, she will not leave me alone. She really wants me to finish her story, I think. Probably because where I left her was not very pleasant. And probably because she's got a whole lot of me in her.

I long ago figured out that my characters are various pieces of me, extracted from my inner workings and exaggerated, sometimes to the extreme. I have roleplayed a lot, so that is where many of my characters have come from, but the first ones, a long time ago when I was a moody teenager, were coping mechanisms I am sure. They were outlets for my creativity, and a safe way to experience the fullness of an emotion without absolutely losing it on someone I'd regret.

Anyway, Zoey is not my first character. Rather she was the last created in a sci-fi MMO that I have since left. She's an explorer of sorts, well trained and well armed, but some part of her deeply identifies with nature in its myriad, multi-planetary forms and she would often shed her armor and her weapons to run freely across the wilds. One of the gifts the science of her time gave her was the ability to morph into creatures, thereby gaining their various advantageous abilities - speed, flight, claws, stealth .. you get the idea. However, something happened to her that messed up the nanos and chemicals involved with the process, and she lost her ability to control the morph, along with the painblockers that blocked the horrible pain of body parts shifting and changing unnaturally. Some days were really bad and all she could do was lie in a crumpled ball on the floor, shifting in excruciating pain. Other times days or months could go by without a single mis-morph.

Zoey was also an alcoholic. Many thought it was merely her way of dealing with her sometimes debilitating condition, but the real reason was in fact all too typical - unrequited love. She was in love with her working partner - a man who was, by the nature of his species, neuter, and while he held her in great affection, never seemed to guess that her fierce loyalty and protectiveness of him had any meaning beyond friendship. His name was Atlas.

Eventually he went to work with someone else off planet, and Zoey kind of lost her mind. She engaged in a relationship with a redhead named Lara, and married her on a whim, all the while wondering what the hell she was doing. She kept working everyday, struggling through the painful days, dogged and depressed and totally listless.

And then she met Dala "Blacktongue" ... and her blades. Dala is a priestess of a Kali cult, worshipper of death and rabid proselytizer, who used the resurrection technology present on the world Zoey worked on to "introduce" the unwashed masses to Mother Death. In other words, she killed Zoey as soon as she walked out of the res terminal, and then killed her again when she walked out again. Wash, rinse, repeat, many many times, until Zoey was "saved" - her mind so ravaged by the endless procession of death that she was now just another mindless death cult zombie.

So, yeah. I think she wants to be happy. I like giving my characters happy endings. But I don't know what to tell her. Atlas is long gone. What else will make her happy? 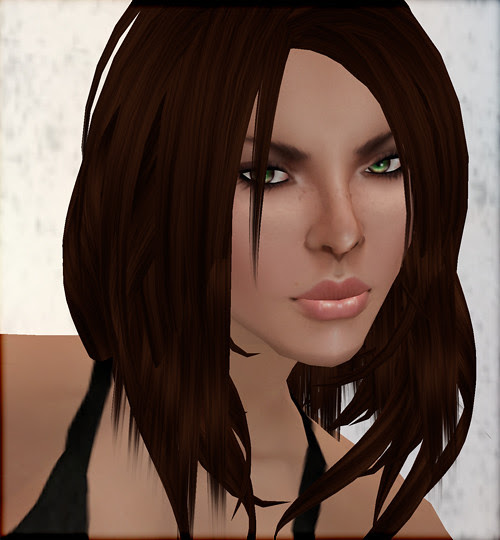 at June 18, 2010
Email ThisBlogThis!Share to TwitterShare to FacebookShare to Pinterest