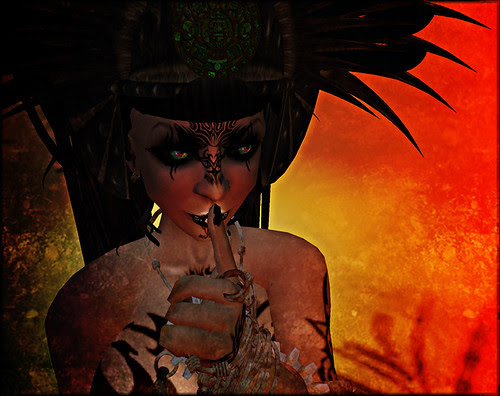 I'm an avatar in the virtual world of Second Life (SL). I am an artist and I have a shop called House of Ruin. I just sell eyes at the moment, but I have goals of expanding. And I'm writing a blog because ... well, I think blogs are neat.

Still, writing a blog is kind of difficult. I don't really know how - I'm very unpracticed. I've written a little bit for Suddenly Seeking Stringer, but I feel like I don't really have a unique voice. Or, at least, whatever voice I have is not the one I want, not the one that actually sounds like me. So maybe here, I'll get closer to finding it.

Anyway, a little more about me - I have not found a single identity to claim in SL, the way some of the people I know have (and I wonder why i don't have a voice? haha). For instance, Winter Jefferson is a vampire, Helena Stringer is a secret Demon, and I have a few friends that are nekos. Claiming an identity in SL is something I've found fascinating in observing those around me. How can they pick just ONE?? I am too much a chameleon to chose anything as permenant. Sometime I feel demonish, sometimes I feel witchy, sometimes I feel beastly, sometimes I feel cyborg, sometimes I feel alien, and sometimes I just feel human.

Ooooooooh. I must be a shapeshifter!

Which is interesting because, when asked that universal question "if you were a superhero, what would your power be?" I've always picked shapeshifting. Aha! See? Now this is all coming together!

One trait that is extremely prevalent in me (and is hinted at in my name) is my propensity and love for destruction and ruin. I love broken down industrial landscapes, ruins, desolation, I get a sick joy from breaking things, I have dreams about the end of the world ... and it seems that I'm very good at breaking down some people too. That sounds bad, I know, but it's usually not. Because I believe in destruction as a force necessary for life, growth, and progress. It's like in Indian mythology, how Shiva dances the world to an end so that it can begin again. I have friends that come to me exactly for that purpose - they know that I will strip away the bullshit and the dead bits to expose what has the potential to grow and fruit underneath.

It sounds more frightening than it is. I'm really a very sweet person at times, sometimes generous, very loving to those that I care about, and deeply ethical. I don't think people should disrespect each other, or be malicious, and that is the quickest way to get me to dislike you. I don't really have a shitlist, I don't (typically lol) seek vengence, but I will exercise my right to not associate with you if I think you are a person unworthy of respect.

This might confuse some people, because I DO like to gossip and bitch with my friends. I love hearing about peoples trials, tribulations, and joys, and sharing the misery or delight of those things with them. Life is precious and it should be celebrated, even in the bad times.

And what makes even less sense? I'm totally not a people person haha! Well, actually, I should simply say: I'm in introvert. And before you jump to conclusions about what that means, let me explain what it means for me: Being an introvert means that I *get* energy from solitude, and I *lose* energy from company. I may enjoy hanging out with someone, but it drains me, and I will eventually find myself exhausted and need time by myself to recharge. It actually turns out to be a useful trait to figure out who my real friends are, too - those that I want to keep are the ones that can accept me as I am without complaining. (and, by the way, there is a difference between complaining and simply stating that you miss someone. It's tricky, but trust me, you can do it without guilt tripping people).

Interestingly, a lot of these traits are very much like the traits of a shaman. And that is the closest to how I'd describe my spirituality. It leans strongly on Buddhism and Taoism, but I love all mythologies, and I respect their power ... and even use it. And I would be dishonest if I said that I have not had experiences of a sort that could classify me as crazy. Like visits from Kali ... no, I'm not going to claim that she's real or not real in the actual physical world. But she's real to me and had an effect on me, and ultimately isn't that all that matters?

So, there you have it - shapeshifter shaman, in love with the apocalypse, that's me! ;)

✮
at January 20, 2009
Email ThisBlogThis!Share to TwitterShare to FacebookShare to Pinterest